Ross Moriarty knows how to nail the pensive model pose – a quick scroll through the Trak Athletic Instagram page is testament to that. Yet Moriarty isn’t simply the ‘face’ of the athleisure brand, he’s the owner. He’s involved in the design, the materials, the fit…

The 26-year-old launched the clothing line last year after being approached with the idea by a friend and the range includes T-shirts, tracksuits and caps, which Moriarty hopes combine the best of street and sportswear.

“It’s gone very well and has been fun, I’m enjoying it,” says Moriarty. “We’re not a massive company and aren’t going to be competing with Nike, so we started small and are trying to build up.

“People have different tastes and different ways of wearing things. We’ve got urban stuff in with sports stuff – that’s the look we’re going for.”

Comfort is as important as style, with fit a key factor for Moriarty, as it is for many rugby players who often have broader shoulders than most. And he plans to keep Trak as an ecommerce business, selling via Instagram and its website, rather than open a bricks-and-mortar shop because the investment required wouldn’t generate the necessary return.

It’s good business sense – and Moriarty is also showing good sense in starting to prepare for life after rugby now. He may only be approaching the mid-point of his professional career but he recognises the importance of putting things in place now rather than getting caught out closer to retirement.

“In rugby you get to meet a lot of people and get given a lot of opportunities. I wasn’t very good at school, I wasn’t the best at the academic stuff, and I want to make sure things are in place for when I finish. Even though that’s a long time away, I don’t want to wait until near the end to start doing things; I’ll be putting myself in the best position if I do it now.

“I’ve seen players waiting ‘til the very end, then they rush and panic to sort things out. The best way to do it is to build things up while you’re playing. It’s nice to be your own boss at the end of the day, rather than be stressed working for someone else and not getting paid too much. And if you enjoy it, it’s not really work.”

Put to the test: Moriarty works out in his clothing range (George Hanks)

He recently expanded his portfolio by acquiring Swansea Vale 4×4 with his uncle, Richard. The garage focuses on servicing 4×4 vehicles and vans, although there may be scope to start selling cars in the future. For now, it was simply a good business decision.

“If you’d asked me a year ago if I’d own a car garage, I’d have thought, ‘Why do that?’. But I like looking for opportunities, the opportunity was there and we went for it. I like cars and it’s a good business.”

The past few months have also seen Moriarty rediscover old interests and fishing proved a popular pastime for him during lockdown. He’s taken advantage of good weather to head out, but he puts any fish he catches back. He’s also been cycling regularly – a good way to stay fit before players were allowed to return to club training.

“I haven’t cycled properly since I was a kid,” he says, “but I live in Swansea Marina so I can get on the cycle path down to the Mumbles. It’s been good to do some things that I used to do but don’t have as much time for as when it’s the season.”

While lots of pros were able to set up gyms in their garages, Moriarty was quite restricted in the equipment he had available – a few dumb-bells and a somewhat rickety bench press that would fall over if he wanted to lift heavier weights. So the back-rower favoured bodyweight circuits and the aforementioned cycling to keep on top of his conditioning.

He also appreciates how the enforced downtime offered some positives, notably giving his body a rest, which was especially important following a hectic 2019 featuring all the World Cup build-up and a run to the semi-finals at the tournament in Japan itself. 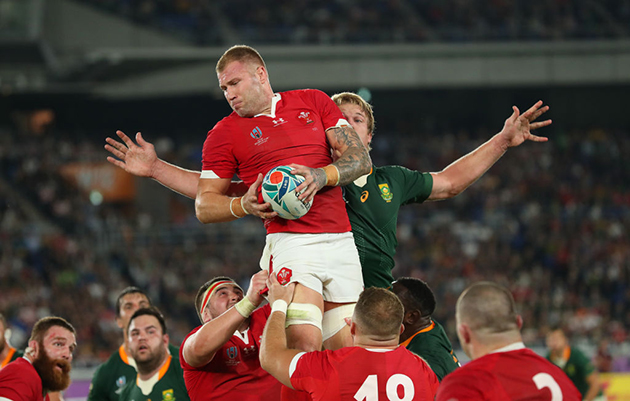 On the ball: Ross Moriarty wins a lineout against South Africa at RWC 2019 (Getty Images)

He says: “It’s probably the longest break I’ve had in rugby and it was quite refreshing. It has benefits – you’re not getting battered as much as you usually would!”

Having said that, and for all his interests off the field, Moriarty is pleased to be back doing the ‘day job’. It was back in April that the Dragons ended months of speculation around Moriarty’s future by announcing that he would be extending his contract at the region – after the back-row had won an appeal with the WRU over his salary valuation. Once he was offered a deal that reflected his worth, he opted to commit to the Dragons, with director of rugby Dean Ryan a significant factor in his decision.

“Dean has been massive for the club,” says Moriarty. “Lots of coaches come in saying, ‘I’ve got a plan, we’ll do this and that’. I really believe in what Dean’s come in and done, and the owners and the people on the board are backing him as well. We’ve had good results that we’d not have had in the past, which goes to show it’s working.

“His player relationships are really good. He understands he can’t keep everybody happy, but he does a very good job at being honest with people, which some coaches struggle with.

“That’s a huge thing, especially in a sports environment; you don’t want to be told one thing and then read something else. Dean doesn’t beat around the bush and he speaks to everyone the same – no one is better than anyone else in the group.”

He has also been impressed by the region’s recruitment and retention of players. Some have moved on, like Cory Hill heading to Cardiff Blues, but Moriarty’s ex-England U20 team-mate Nick Tompkins has arrived on a year-long loan from Saracens, Jonah Holmes has joined from Leicester and a host of others have re-signed. There’s a new-look coaching team, too, with Ryan bringing in Mefin Davies, Simon Cross, Luke Narraway and Gordon Ross.

Moriarty is looking to deliver plenty of go-forward for his team with his powerful carrying game, particularly as he’s played more matches for Wales than the Dragons since signing from Gloucester in 2018. Speaking to him about the past couple of years, you get the sense that the intensity of international rugby has perhaps forced him to curb his natural instincts.

“I’ve not played much club rugby since being at the Dragons and international rugby is so results-driven that there’s pressure on coaches and players. You don’t want to make mistakes and you don’t want to express yourself as much.

“I feel in the last few years I’ve just played international rugby and got stuck playing a game plan, doing the same thing. When the season was cut short, I was enjoying playing; I was back playing more care-free, I was more relaxed and there were opportunities in the game to do different things. I was disappointed we had to stop and I’ve missed it.”

Of course, when the season was suspended, Wales were nearing the end of their first Six Nations campaign under Wayne Pivac, losing three of their four games before the Scotland match was postponed due to the pandemic.

That fixture will now be played on 31 October and while sitting fifth place in the championship table will be unusual for many in a squad more accustomed to success in the competition under previous coach Warren Gatland, Moriarty believes the signs are promising.

“Warren Gatland was a great coach for Wales and has done amazing stuff, but just having a change in the coaching group and a fresh start is huge for a lot of players. We haven’t got the results we’d like but we’re playing rugby that’s enjoyable and some of the tries we scored in the tournament were great.”

It’s clear Moriarty believes both the Dragons and Wales are on the right track. The back-rower also seems to be on the right track – or should that be Trak! – off the pitch as he takes steps to prepare for when he hangs up his boots. That sport-life balance could also be helping him to relax and relish his rugby more.

“It’s nice to have something away from rugby that I enjoy doing; it does take my mind off rugby stuff. In the past I didn’t have anything else to think about, so it gives me something else to focus on as a professional sportsman.”

This article originally appeared in the September 2020 edition of Rugby World magazine.