VALENCIA (Spain) – A year has come and gone since Toni Naspler Peraire celebrated one of the biggest moments of his young sport life, winning the FIBA U16 European Championship in the Italian city of Udine.

Now Naspler is taking aim at something else with Spain that could be even more unique, a title in the FIBA U17 Skills Challenge.

“I think it’s been a good idea, this FIBA Skills Challenge,” he said. “It’s a new competition that none of us are accustomed to playing. It’s different because you are competing against yourself and with your team in order to get the best time.”

He continued: “What I’ve found most difficult is to get the ball inside the circle because the pass comes out very strong. But it’s good for us to keep us entertained and keep us competing, which at the end of the day is what we most want to do.”

Spain, who have topped Group B after wins over Guinea, Australia and Portugal are set to take on Panama on Friday in the Quarter-Finals, have been doing the Skills Challenge at L’Alqueria, the state-of-the art hoops complex at Valencia Basket.

They are doing this in conjunction with a national team training camp.

“It’s been a beautiful idea of the Spanish Basketball Federation to bring us here to Valencia,” Naspler said.

Not that long ago, Naspler wasn’t able to indulge in his passion due to the coronavirus pandemic. Spain went into lockdown in March and Naspler, who plays at the Baxi Manresa club in Catalunya, had to stay off the basketball court for a couple of months.

He made something good out of a difficult situation.

“The lockdown allowed me to catch up with my studies, which during the year are more difficult,” he said. “It helped me a lot because I’ve was able to pass all my tests but what I missed a lot was the day to day of being on the court playing basketball and sharing it with the teammates that I’ve been with for several years,” Naspler said.

“After the lockdown in mid-May, there was like a post-season in which the (Baxi Manresa) players that were around were able to take part in. I was lucky enough to train with those players, with basketball professionals, for two months.”

“MY AIM IS TO WIN THE FIBA U17 SKILLS CHALLENGE AND TO CONTINUE AT MANRESA AT HOME WHERE THEY TREAT ME REALLY WELL.” 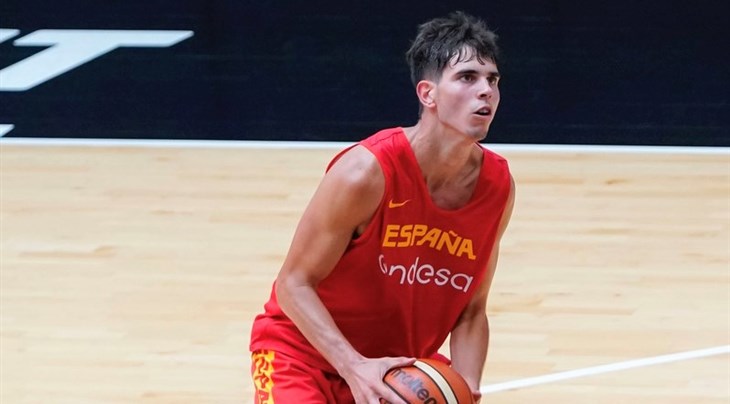 Naspler has recaptured his physical shape, and form on the court.

“The best thing has been that I’ve been able to get back with the level of basketball that I have,” he said. “During the confinement, I lost that. It’s been great to be with my teammates, the people that I missed. I was fed up with having to do all of these online zoom calls. It was just nice to be able to spend time with them.”

Now he is focused on winning a crown for a second consecutive year in the U17 Skills Challenge. There is nothing like lifting a trophy.

Along with 11 other smiling teens and drenched in sweat, he stepped up to the top of the podium last summer before being awarded a gold medal.

As the captain, the 1.94m (6ft 4in) point guard then had the privilege of hoisting high into the air the tournament trophy. 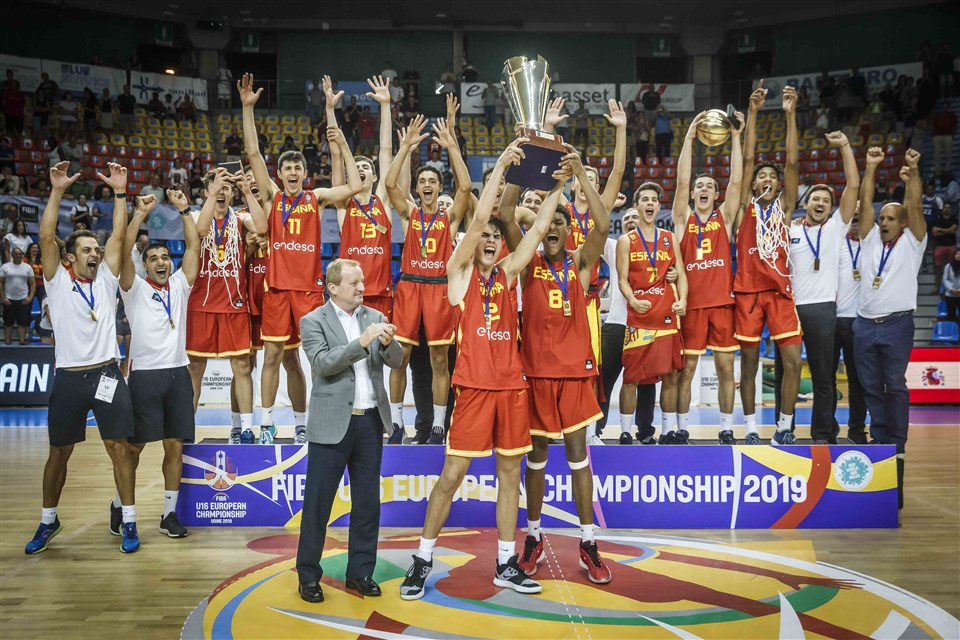 “It was a very difficult tournament with the exception of the semi-final, in which we were superior to Russia,” he said.

After a narrow win over North Macedonia on opening day, Spain claimed convincing victories over Latvia and Israel. Naspler and Co then scraped narrows wins over Germany in the Round of 16 and Serbia in the Quarter-Finals. Following a blowout of Russia in their Semi-Final, Spain got on top of France early and marched to the title.

It was a very good summer.

“The get-together was special,” Naspler said. “It was great because most of the players hadn’t seen each other for the whole year. Very beautiful.”

So what about Naspler’s goals, both in the short term and the long term?

“My aim is to win the FIBA U17 Skills Challenge and to continue at Manresa at home where they treat me really well, my home club,” he said. “I haven’t really thought further ahead. I want to focus on my studies and have basketball as second option. I do hope that one day I can become a professional player.”